Among all the spinning reel components, the anti-reverse switch causes the most confusion, hands down. Despite this confusion, it is quite a beneficial tool. Before we move into the details, I know what you must be thinking – what is the purpose of this feature anyway? In short, the anti-reverse switch on spinning reels prevents the backward turning of the reel and engages the drag. 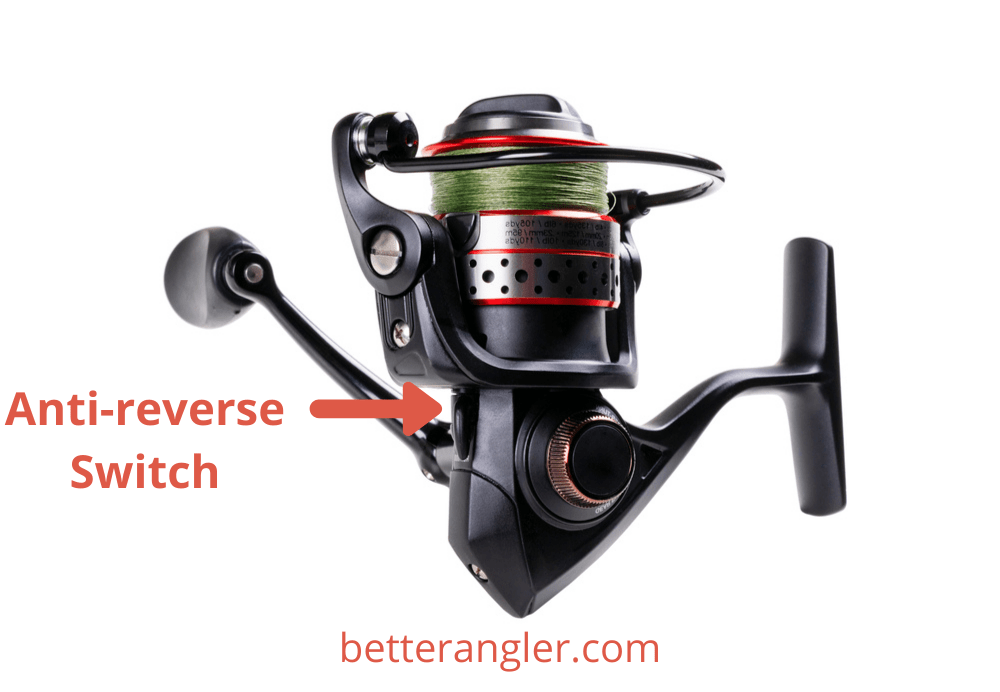 In fact, there are reels where the angler has the freedom to choose whether the switch is engaged or not. So, in place of letting the drag fight the fish, this feature actually helps them ‘back-reel.’ In this post, we will learn more about this switch and see what else it does and how you can use it.

What is The Anti-Reverse Switch On a Fishing Reel

The anti-reverse is a unique mechanism present in fishing reels that prevents the handle and the bail from turning in both directions. The bail no longer makes even the slightest backward movement, and you achieve a strong hookset. If there is a delay in hookset, then you are in for a disappointment. Any problem with hookset can lead to you losing the fish.

If you purchase a reel that is of a higher-quality or premium level, you get access to the instant anti-reverse, and here, you can rest assured you won’t see even a hint of backward movement.

The anti-reverse switch is usually found somewhere around the bottom of the spinning reels. If you know how to use it, then it can be quite helpful when catching fish, as the fish fights the reel instead of you.

You can reel in reverse or back-reel and do all of this with complete freedom instead of deriving line tension from the drag system alone.

Why Do Spinning Reels Have Anti-Reverse

Sometimes, the spinning reel might be spinning in both directions, and people are left confused. This movement often occurs when the anti-reverse feature is not functioning correctly. Your reel will not spin in the wrong direction if the switch is performing the way it should.

With the switch turned on, the spool and the handle stop spinning backward almost immediately. The result is the line no longer comes off the spool. The handle and the spool will still turn in both directions if you have not engaged the switch.

How to Use the Anti-Reverse

As you probably know by now, spinning reels are known for their ease of use and versatility. You can catch multiple species of fish with them. The drag system is also quite user-friendly, and if you are only a beginner in this field, then spinning tackles are the best choice. After mastering them, you can even move on to using other conventional reels or baitcasting reels.

However, learning to cast a spinning reel farther also means that you have to learn how to use the anti-reverse switch on it. This feature is very similar to that of the drag system. You relieve the tension and play the fish. If this switch is off, the angler will be able to reel both backward and forwards. The line will keep releasing as you reel backward.

If you are only a beginner and learning how to maneuver the spinning reel, then the safest bet is to keep the anti-reverse switch on. Doing so will ensure that you are only handling the reel in the forward direction.

Gradually, as you keep practicing and master the perfect technique, you can turn the switch off. Doing so will allow you to practice and play with smaller fish like Crappie and Bluegill. Panfish cannot engage your drag because they do not have much power. To catch them, use a macro-line and work them both back and forth to alleviate the tension.

How to Stop fishing Reel From Spinning Backward

There might be several reasons behind why your spinning reel is going both ways. But most of the time, the answer is ‘spinning reel anti-reverse is not working.’ And if that is not the case, then there might be some problem with the drag.

The simplest solution of it is to engage the anti-reverse button. It should work properly after that. But if this does not help your case, the problem might lie in the entire system, or something is wrong with the switch itself. In that case, take the parts of the fishing reel apart and check the anti-reverse system for any damaged or broken parts. If any component is lying misaligned or broken, then it might hamper the spinning direction. If any part is visibly damaged, you will have to replace it.

If you are not confident to take the pieces apart and then put them back together exactly the way they were, then you should not try yourself and take it to a professional. Another common problem other than the anti-reverse switch is that the spinning reel’s spring has been damaged or disconnected, leading to excess backspin.

However, there are some spinning reels in which there is no anti-reverse switch. The reel’s design is such that it can cast the line out and then retrieve it with the spool’s help. But the more recent models nowadays have the anti-reverse switch. For proper functioning of this part and other parts of the spinning reel, ensure you do adequate reel maintenance after every fishing session.