A common dilemma many people find themselves in is deciding whether they really need a casting reel or if they need to try out some new techniques. The most common question on everyone’s mind in these instances is – ‘Can I use a spinning reel on a casting rod?’ 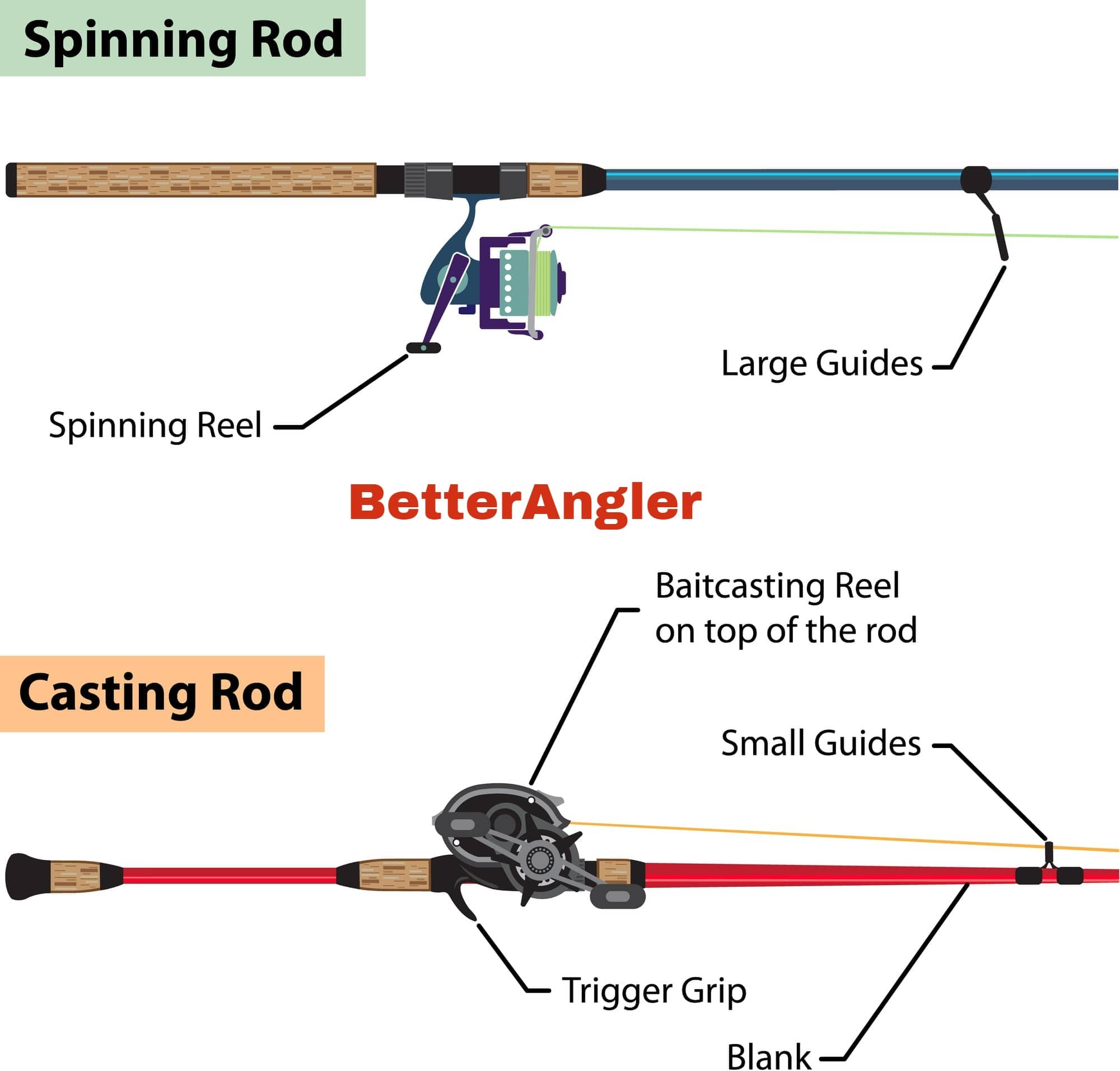 In this blog, we are going to answer this question in detail. In short, it depends on the type of fish you plan to catch, but in general, you will get the most out of a spinning reel if you use it on a spinning rod.

However, you can use spinning reels on baitcasting rods as well, but you also need to be prepared for some challenges along the way.

Is the Safety of the Rod a Concern

If you look at a casting rod, you will find that starting from the reel to the tip; the line has guides woven throughout its length. These guides usually have their faces pointing upwards in a casting rod. So, if you plan on catching a relatively heavier fish, you would be able to do so with ease without placing too much pressure on the rod itself. More importantly, you don’t have to put too much pressure on the tip.

On the other hand, the guides on a spinning rod are present towards the bottom, making the spinning rod perfect for catching smaller fish where you wrestle and tire them out, but they are not as useful for bigger fish. Whatever type of fishing you are in, It’s always important to choose the right kind of fishing rod.

When you mix both pieces of equipment and use a spinning fishing reel on a casting rod, you have to use the rod in an upside-down manner. You might indeed be able to catch some decent fish with this combination, but at the same time, you have to keep in mind that you will be placing a lot of pressure on the rod itself.

What’s more, after extended use, there is a chance that the rod might break from that excessive pressure. So, if you are out for an impressive catch with this equipment combination, you have to take into account the potential for damage as well.

If you want the rod to last a long time and give its best, prolonged use of this technique is not advised. Instead, you should use baitcasting reels with them.

Does the Casting Capability Remain the Same

Most anglers will tell you that the casting rod will be able to give you far more casting distance than the alternative, though it does require extra practice as well. On the other hand, the spinning rod is mostly popular because of its ease of handling and its ability to cast in a straight line more easily.

Beginners usually use the spinning rod, but with this advantage comes the disadvantage of a limited casting distance.

But even if you use the right fishing rod, you won’t be able to make the most out of it if you are using the wrong type of reel. You have to choose a reel designed for the rod in question. For example, the line is released in a coil when you use a spinning reel.

This coil is the reason why spinning rods have guides that are wide and large. As you move towards the tip, the guides get smaller, reducing casting friction.

So, if you place the spinning reel on a baitcasting rod (which has smaller guides), the line will be able to release in a coil, but the release speed will slow, minimizing the cast distance in the process. However, You can improve your casting distance if you really know how to cast farther with a spinning reel.

What are the other factors to consider

When you are using a spinning reel to cast, you don’t need to apply the pressure evenly on the line. But if you use the alternative option, your line might not be in place at all if you don’t cast properly. Moreover, there is the potential for tangles and webs in the line in the case of an improper cast. So, even if you decide to use the combination of a spinning reel on a casting rod, you cannot compromise on your casting technique. That is where the real difficulty lies.

When you use this combination of equipment, the spinning reel will be on top of the casting rod. Consider that there is a reel seat on casting rods that are specially made for baitcasting reels.  If your equipment placement is not right and they do not sit well, the first thing that will happen is that there will be a formation of multiple loops when the line comes off the reel.

As such, to make the line straighter, an excess of friction will be created by the casting rod. This, in turn, will hamper the line and the direct result is that your casting distance will be compromised.

So, if you don’t handle the equipment properly, your accuracy and casting will be totally out of sync. You are going to have a bad fishing experience. If despite all this, you find yourself dead set on using this combination, you can do so but as the line comes off, make sure you exert significant pressure on the spool. Also, to get the best catch, you might have to keep adjusting your casting accuracy and distance from time to time.

All in all, the answer to your question is yes, you can use a spinning reel on a casting rod, but you also have to keep the most prominent disadvantage on your mind – you will be compromising a bigger catch. The spinning reel is simply not built for a casting rod, and so, if you use them together, there are high chances of damage to both. So, the better option would be to use a more durable alternative.