Are you looking to buy a new spinning reel but feel confused about choosing a front drag or a rear drag option? Well, you are at the right place because, in this blog, I’ll discuss the difference between front drag and rear drag reels. I’ll include the pros and cons of each so that it becomes easier for you to arrive at a concrete decision. 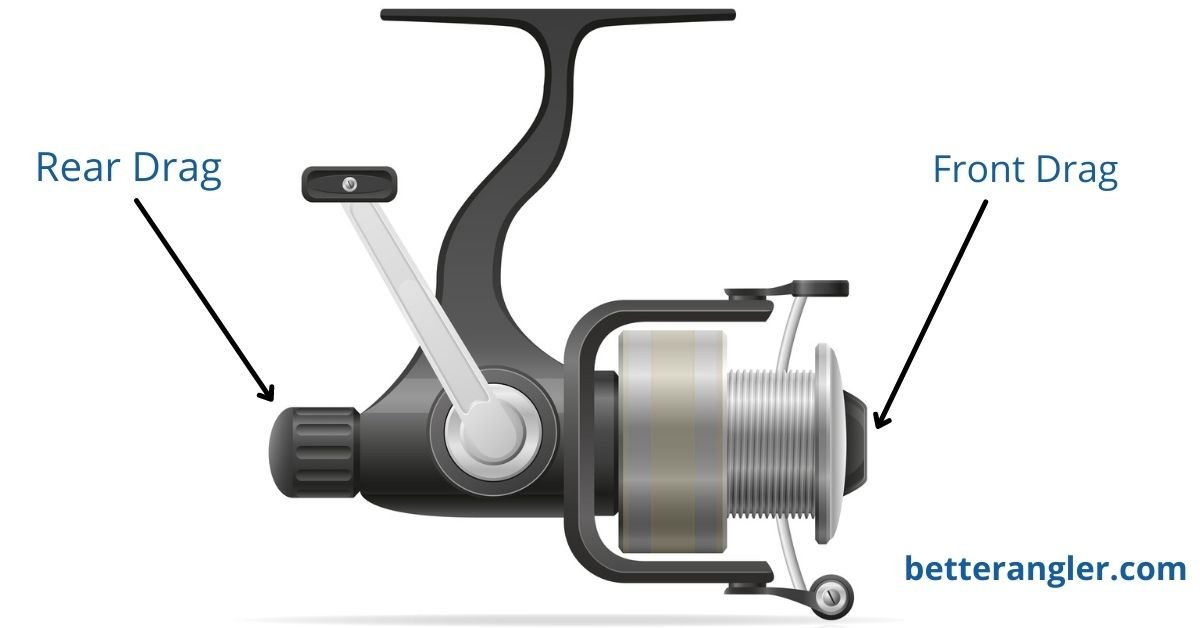 However, the ultimate choice will depend on many factors, and they will become apparent to you once you understand what rear and front drag is, how they work, etc.

What is Drag on a Fishing Reel?

Before we move on to the different types of drag and how you should choose between them, you need to understand what drag is. Inside your fishing reel, there is a set of friction plates, and these are known as drag.

A strong enough pull from the fish will overcome the friction. Then, the reel will start rotating backward. The drag is adjusted before the cast and while the fish is fighting on the line. Regardless of the material or the system you are using, a series of washers and disks remain connected to the spool in these drag systems.

Spinning reels come with either a front or rear drag system. In comparison, baitcasting reels work differently by using their unique drag system.

What is Front Drag?

Front drag reels are reels with the drag knob located on the front of the reel. They are made for those who want to change their settings from the convenience of a knob on the reel’s face. These are some of the most common spinning reels you will find in the market, and they are used for a wide variety of fishing techniques.

In these types of reels, once the drag plates are fixed within the spool, they are pressed with the help of the circular knob that we often use while turning the handle to drive the spool. Lure anglers usually prefer the front drag reels over the rear drag ones.

These reels are a major game-changer for different types of fishing. Reel manufacturers have realized that fishermen don’t want to struggle with their equipment. As a result, front-drag reels come with an answer to this problem as it has all of its parts accessible by anglers making adjustments quickly and easily without fighting against your gear!

Front drag fishing reels offer smoother retrieval. An angler can control the excessive line without having it tangle or slip off if they tighten up too much. Another advantage of them is how effortless setting adjustments are compared to rear drag reels.

What is Rear Drag?

A rear drag reel means the drag is located on the back of a fishing reel. Rear drag reels are built for those who want to keep their settings at the rear of the reel. These reels are good if you constantly change your line and need quick access to all parts on the backside.

Some people prefer the rear drag reels because of the fight that comes with them. You can easily change spools when you use a rear drag reel while coarse fishing. Thus, you also get to keep your line in the water for an increased duration.

So, by now, you know both the front drag and rear drag have their own set of characteristics suitable for different situations. Many professional anglers use front drag reels because they offer smoother performance. The discs in front drags tend to be larger, making them work more smoothly than their counterparts.

Rear drag is also easier for changing spools and adjusting the level of braking while fighting a fish with ease due to its design features like push-button release or easy access knobs that make it quick and convenient during your time on the water.